2020 doesn’t have to be a non-event: Why virtual events are the silver lining of lockdown 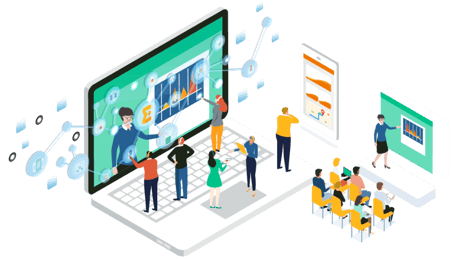 The last few months have been chaos for event planners and marketers all over the globe. For many, it’s been a thoroughly frustrating time and a never-ending spiral of cancellations and postponements.

Gartner is now advising companies to prepare contingency plans for cancelled events, including online delivery for hosts and for exhibitors to shift event budgets to digital channels. Microsoft has just announced that all its conferences will be 100% virtual until the middle of next year. And, in fact, the majority (65%) of the B2B marketing industry plans to reallocate some or most of their live event budgets to online events, such as webinars.

Yet if there’s one silver lining to be found in this scenario, it’s the growing realisation that virtual events can offer an incredibly easy, cost-effective and powerful way to bring people together. And in many instances, virtual events can actually be a more powerful and succinct way to engage people, particularly in the tech B2B space. Here are five reasons why:

It goes without saying that hosting face-to-face events can be incredibly expensive. The costs associated with booking reputable venues, setting up equipment, keeping attendees fed and watered, and often, providing entertainment, can seriously add up.

As this article on Eventbrite says, “virtual means less overhead costs — after all, you’re not budgeting for a venue, large events staff, and other in-person line items. So you get to drastically reduce your outgoings (not to mention, your carbon emissions), while spending more on curating the best virtual event possible".

Online events are clearly much easier for people to attend than face-to-face events – and in the majority of cases, they’re also free. As a result, they often attract far greater audience numbers, which can significantly increase their potential reach and impact.

In March this year, for instance, Salesforce had to quickly reinvent their World Tour Sydney due to the COVID-19 crisis. In just 13 days, they were able to pivot their event and deliver an online experience on 4 March.

The event attracted over one million social media impressions, and 80,000 people watched the livestream – eight times the number they were anticipating at the face-to-face event. They also received 1.5 million video views across Facebook, Twitter, LinkedIn and YouTube on the conference day.

While it can sometimes be difficult to track the return on investment generated by face-to-face events, online events can prove easier to track and measure. The exact way in which event attendees interact during a virtual event – and afterwards – can also be measured, making it easier to nurture potential leads.

It’s also very easy (and cost effective) to turn an online event into an on-demand webinar, which people can watch at any time in the future – or to use it as the basis for a nurture asset, such as an eBook, infographic or online content hub.

As such, it’s very easy for a digital event to attract ‘attendees’ and generate leads long after it’s actually been held.

One of the key draw cards of any event – physical or virtual – is the caliber of the speakers it has on offer, and the value to which they can add to the session content. Obviously when hosting a face-to-face event, businesses have considerable geographic limitations regarding which speakers they can/can’t attract. However, with virtual events, many of these barriers simply don’t exist.

The IBM Think 2020 event, for instance, featured a variety of guest speakers and celebrity faces such as Will.I.am, Amal Clooney and Imogen Heap to make their content more engaging​. They also used the virtual event to globally introduce their newly appointed CEO, Arvind Krishna.

IBM, for instance, recently announced that their IMB Think 2020 event – originally scheduled to be held in San Francisco – would be a digital-first event. The focus was on highlighting IBM’s industry-first technology and expertise, without the need for attendees to travel. They had over 100,000 clients and business partners register for the event, which is three times more than any audience they have ever had for their physical Think events. Now, IBM Think 2020 Content is available on demand for anyone to access, at no cost and at any time.

Just as international speakers can more easily attend a virtual event, so too can attendees. People can dial into a virtual event from all over the world – meaning they can potentially reach far greater numbers of people.

The Adobe Summit 2020, for instance, was originally planned as a five-day event in Las Vegas with 23,000 expected attendees. ​In response to COVID-19 concerns, Adobe shifted to a virtual event in less than 30 days.

The event had more than 100,000 registrants and over 450,000 views from more than 199 countries, alongside content that was delivered in French, German and Japanese, as well as English.

Microsoft, too, was planning on holding its annual developer conference in Seattle during May this year, however decided transform to a digital event due to the COVID-19 pandemic. In 2019, tickets for Build 2020 cost $2,395. With the switch to the digital event it is now on-demand and free for users globally for the first time, making it much more accessible on a large scale.

If you’re interested in learning more about online events and how the team at Splendid can help, get in touch.